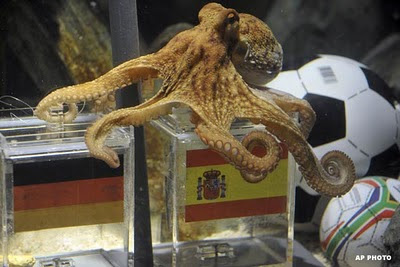 Paul, the Octopus, is right again! Spain have beaten Germany in the FIFA World Cup 2010. It has now 6 correct predictions out of 6 predicted. It has correctly predicted Germany's win over Argentina, England, Australia and Ghana and also Germany's loss to Serbia. This is 100% accuracy! Amazing, isn't it?
In the final 2008 European Championship, Paul predicted Germany to beat Spain. That was the only time it was wrong so far. Spain won the match.
All eyes will now be on its prediction on the impending match between Germany V Uruguay this coming Saturday (11.7.2010 at 2.30 a.m.).
Paul lives in an aquarium in West Germany. Its keeper is Oliver Walenciak
Posted by Ben Gan at 1:08 PM