The lunar year of the rabbit 2011, commences on the 3rd February, 2011. Celebration normally last 15 days. The Hokkiens consider the 9th day as the most important day when offerings are made to the "Sky God". To Penangnites, they celebrate the 15th day, Chap Goh Mei, grandly. A maiden who wishes to get a good husband should throw mandarin oranges into a river.
This belief has existed over the years. Believe it or not, that's up to you.
Well ladies, if you want to get a good husband, don't forget to throw some mandarin oranges into a river.
Good luck and Happy New Year to all and sundry!
Posted by Ben Gan at 12:42 PM

The manipulation of silver is about to end

Rumors are flying that more than 25 lawsuits have been filed against commercial investors such as JP Morgan and HSBC, accusing them of price manipulation to keep the price of silver artificially low.

The Commodities Futures Trading Commission (CFTC), which is to the COMEX what the SEC is to the New York Stock Exchange, has passed a new law which will force COMEX to play fair, forbidding such massive short positions on silver.. The actions of the CFTC are one more reason for last November's 14 percent price rise in silver. The price manipulation of silver is about to end.
Read more.
Posted by Ben Gan at 11:46 AM

Accordingly to the World Bank, 90% of the rivers and lakes in China are heavily polluted. Because of urbanization and industrialization, tons of toxin waste are discharged into these waterways yearly. This is a huge problem for China and a great opportunity for companies that have the technology to help the government mitigate this problem.

Today's Denial Could Be Tomorrow's Reality

Someone says that in China there are two types of companies. The ones with the government as an important shareholder and the ones that fail. What about Malaysia? In the past, it's probably the other way round. But things have changed. Look at KPJ, Kulim, Telekom, TDM and EPIC. Did they not benefit from their connections with the government?

EPIC is now given the exclusive rights to build, manage and operate a duty-free shopping complex in Tasik Kenyir. Why do you think that they give it to EPIC? The answer is obvious. Because, the Trengganu State Government (TSG) is its major shareholder.

Not long ago, Ahmad Zaki Resources' stake of 20% in EPIC was bought over by TSG for about RM3 per share. TSG now controls over 60% of EPIC.

I am intrigued as to why EPIC is not mentioned when people talk about oil and gas. Actually, it is a specialist in this sector. Its services include: fabrication, engineering works, manufacturing & assembly, wire line & rigging, and testing & inspection of equipments, warehousing. etc.

EPIC owns the Kemaman Supply Base (KSB) which caters to the needs of over 250 companies supporting the petroleum industry. Major companies already operating in the area are: Petronas, Esso, Cari Gali Hess, Talisman, Petrofac, Newfield and Murphy. Later this year, some 50 more companies will be added to the list of clients when its expansion plan is completed.

EPIC's other core business is in the management and operation of the Kemaman Port which is one of the deepest ports in Malaysia. Other positive attributes of the company is its strong balance sheet.

For the year ended Dec 31, 2010, EPS is forecasted to be not less than 30 sen. In view of the present bullish market, and looking at other counters, a PE of 12 for EPIC is not illogical. This works out to RM3.60 per share.

Is privatization on the card for EPIC? TSG says no. But, often today's denial is tomorrow's reality. Only time will tell.

An excerpt from Bursa reads as follows:

I like this stock and I am presently heavily invested in it.

AS USUAL, YOU BUY, SELL OR HOLD AT YOUR OWN RISK ABSOLUTELY.
Posted by Ben Gan at 12:49 PM

Have a way with Sleeping Beauties and grow rich

Keeping concubines is expensive. But keeping Sleeping Beauties (SB) is a sure way to wealth. In stock-market lingo, SB are undervalued stocks with great potentials, lots of cash, and great assets. They are prime targets for takeovers.

Those who wish to keep SB must have the knowledge to identify them, cash to buy and hold, the time to monitor, and the patience to wait. If you have idle cash, you should start looking for SB. One thing good about them is that they will pay you fairly well while you wait.

I love SB. They are unexciting but they make lots of money for you. And that's what you want. Right?

Don't get married to SB. Once they are overvalued, they should be sold.

You work hard for your money. Make sure they work smart for you.
Posted by Ben Gan at 8:39 AM

Mitra has been in the news lately. Since the announcement of procuring a contract valued at RM53,500,000 to be completed in 10 months time, effective from Jan 01, 2011, the stock price has been moving up. At the time of posting this post, it is done at 1.75.
It is rumored that the price will be pushed up to RM2.00 before the expiry date of the warrants to encourage the conversion of the warrants into ordinary shares. Does this make sense to you? Think about it.
Posted by Ben Gan at 11:17 AM 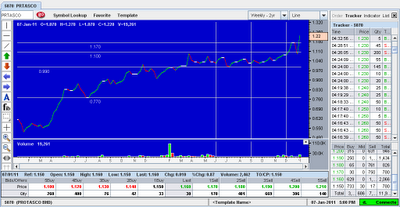 Activity at Protasco has improved. As shown in the weekly chart above, the stock is now well on track to move higher. Buy some and get some new year angpows.
Best of luck, and as usual, you buy at your own risk absolutely.
Posted by Ben Gan at 9:11 AM

TDM still at a discount at RM3.39 per share

Expectation of a general election is the catalyst to a bullish 2011. Small-cap and mid-cap stocks are likely to narrow the gap of price between them and the big-cap blue chips.

The Government Transformation Plan (GTP) to mitigate corruption and crime is of prime importance. If this major plan can be carried out with firmness, fairness and transparency, much can be achieved. Foreign funds are more likely to come in and keep on coming in.

The other major plan is the Economic Transformation Plan (ETP) which is meant to boost private sector investment and transform Malaysia into a high-income country. The success of the ETP depends on how well the GTP is implemented.

Corruption in any country is hard to curb; crime is in the same category. If the GTP is successfully carried out, undesirable activities, such as illegal gambling, gangsterism snatch thieves and prostitution will be greatly curtailed. This will create a clean and peaceful environment for the country that is a priority to conducive to good living.

Merger and Acquisition (M&A) is the other catalyst that is likely to spur the market to greater heights. The government is encouraging this. Expectation is high in this activity and many M&As will come on stream as the year progresses.

Malaysia is lucky that it is relatively safe from natural disaster. It is also endowed by Mother Nature with abundance of fresh water, clean air, arable lands and useful commodities.

There is no reason why it can't be as prosperous as Singapore. With the right approach, 2011 should turn out to be a Super Bull in motion.
Posted by Ben Gan at 3:26 PM

According to Bursa, foreigners bought Rm11 billion and sold RM8.4 billion of stocks in December, 2010. This means an inflow of RM2.6 billion of foreign money.
The total trade for the month was RM35.7 billion. Thus it can be seen that foreigners were more active and traded more than the locals.
Some analysts say that foreign funds inflow has slowed down since some 3 months ago. If this trend were to continue, then probably, foreign funds may come to a trickle by the end of the 2nd quarter when the QE2 easing comes to an end.
To read more, click here.
Posted by Ben Gan at 7:11 AM