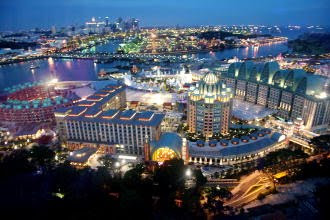 DOUBTS about whether Genting Singapore had hit the jackpot with Singapore's first integrated resort (IR) were put to rest on Thursday.

Genting Singapore's Resorts World Sentosa (RWS) had powered ahead to generate a sparkling $860.8 million in revenue with pre-tax profits of $503.5 million for the second quarter of this year.

This works out to RWS' cash registers netting $9.6 million in daily sales, from which Genting Singapore pocketed a tidy $5.6 million in pre-tax profits.

More importantly, the performance refutes early scepticism that the IRs, and the casinos they house, would not take off.

The decision to build the IRs - taken by the Government in 2005 - was to beef up tourism in the city-state and create jobs but the move was hotly debated.