Day-trading? Can You Win? 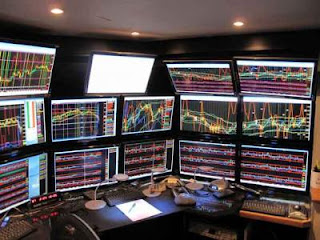 Henry Blodget | Mar. 29, 2010, 10:02 AM | 14,174 | 111
I have so many charts. So how can I lose?
Image: Steve Price's Flickr
According to one academic study, 4 out of 5 people who do it lose money and only 1 in 100 do it well enough to be described as "predictably profitable."
Most of the folks who do it, in other words, would be far better off working at Burger King.
As is often the case when we bring up these facts, some readers screamed. One said that our brain-damage was made patently obvious by the fact that Wall Street professionals day-trade all day. If day-trading were so dumb, then why would professionals do it?
Here's what that particular reader is missing:
Most Wall Street traders get paid to day-trade other people's money.*
That's a huge difference compared to what most stay-at-home day-traders do.
The average professional trader gets paid somewhere between 1% and 3% of assets per year just to trade those assets all day. The average hedge-fund trader gets paid another 20% on top of that for any "gains" he or she makes (regardless of whether the gains are the result of the trader's trading or the bull market).
The average stay-at-home day-trader, meanwhile, trades his or her own money. And while many of these traders do fine on a gross basis (before costs), once the costs of this trading are deducted (commissions, taxes, research and information, time), their performance is usually downright awful.
The reason so many professionals day-trade, in other words, is that getting paid to day-trade other people's money is one of the best businesses in the world.
Day-trading your OWN money, meanwhile, is one of the worst.
* There's another difference, too, of course: Most Wall Street traders have skills, information, and tools that day-traders can only dream of. Trading is a zero-sum game: Market moves aside, every dollar won by one trader comes out of the pocket of another trader. Day traders competing against Wall Streeters is the equivalent of a college football team (or Pee Wee team, depending on the day-trader's skill) competing against a pro team. Is it possible to win? Yes. But it's highly unlikely (1 in 100). Wall Street's winnings do have to come from somewhere, though, so Wall Street thanks the day traders for playing.

Read more: http://www.businessinsider.com/henry-blodget-heres-what-day-traders-dont-get-2010-3#ixzz0lDXAmYMq
Posted by Ben Gan at 8:10 AM