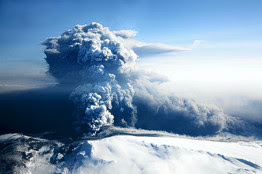 Travel disruptions could continue for months.

How long will this disrupting eruption last?

As Europe writhes in agony, millions of people are asking this question, desperately praying for relief from the paralysis of the airline industry caused by an Icelandic volcano.

This eruption is a perfect storm, a combination of wind and ice conditions that has turned an ordinary eruption into a crisis. Last month, the same volcano erupted harmlessly. But last week, magma found a second pathway to the surface, this time beneath a glacier. When hot magma touched ice, it instantly created a burst of steam and produced glassified silicates. The sudden expansion of steam created a colossal explosion that sent billowing clouds of glassified silica ash three to five miles into the air over Europe. The ongoing eruptions of the volcano, which continue unabated, are caused by a series of steam explosions as magma continues to encounter glacial ice.

There are three scenarios for what could come next: 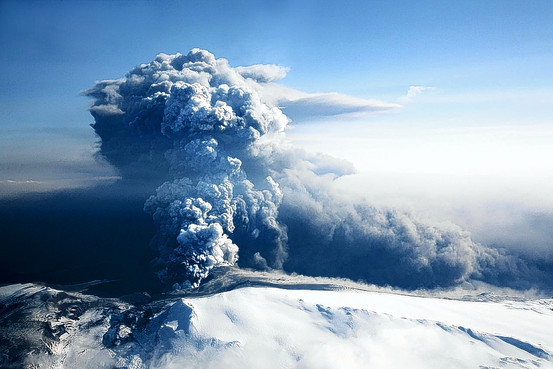 1) The best scenario is that over the next few days either the magma spends itself or the ice finally melts. Without ice, the eruption will become an ordinary one. Scientists have tried to send airplanes to the volcano to analyze how much ice is left, but even these airplanes were grounded by the clouds of ash.

2) The most likely scenario is a repeat of the 1821 eruption by the same volcano. That eruption sputtered off and on for 13 months. If this occurs again, European aviation may have to play cat and mouse for several weeks to months. Planes will only fly when the jet stream is blowing a certain direction or when the volcano is relatively quiet. Under this scenario, pilots will be in constant fear of encountering ash, which can shut down a plane's engines and sand blast its windshields to such an extent that it is impossible to see through them. There have been about 90 airplane encounters with volcanic ash since 1980, and in one instance all four of the plane's engines were shut down, almost causing a tragedy.

3) The worse case scenario, which is unlikely, involves this eruption triggering another, larger eruption. There are 35 active volcanoes in Iceland, and one eruption has been known to set off another. The worse case happened in 1783, with an eruption lasting eight months. That eruption killed off much of the livestock and agriculture in Iceland, which in turn caused the death of about 25% of the island's population.

The eruption also eventually killed tens of thousands of people on the Continent. Benjamin Franklin was in Paris at the time and was one of the first to connect the rapid change in local weather that collapsed European agriculture with a volcanic explosion. 1783 became known as the horrible "year without summer." Europe plunged into a period of poverty that lasted for years. Some historians believe that this may have contributed to the French Revolution of 1789.

Unfortunately, our institutional memory lasts a few decades at most, while the cycles of mother Earth are usually measured in centuries or millennia. So for the future we have to appreciate that we humans will be pushed around like pawns as the earth slowly but inexorably changes and shifts.

We may think of volcanoes now as villains. But they are also givers of life. Much of the air we breathe and the ground we walk on can be traced back to ancient volcanic eruptions. And the extinction of the dinosaurs 65 million years ago (which paved the way for the coming of humans) might be traced back to a one-two punch caused by an asteroid collision and simultaneous volcanic eruptions.

The fact that humans are about 99.9% genetically identical could, according to one theory, be traced back to the Toba eruption in Indonesia roughly 70,000 years ago. That eruption might have killed off most of the human race, leaving only a few hundred of us to populate the planet. We might, therefore, owe our evolution and very existence to volcanoes.

In the wake of this eruption, there is much to be done. We need a uniform and rigorous international policy to deal with these eruptions. The European Union was caught off guard. There was chaos and unnecessary confusion as nations scrambled by themselves to salvage whatever they could of their airline industry.

We need more active reconnaissance of volcanoes, which at the moment is often left to a handful of lonely scientists. Iceland has to be closely watched, since it lies at the top of the Mid-Atlantic Ridge, a huge gash that splits the Atlantic Ocean and is slowly pushing the U.S. away from Europe and Africa.

We also need to do more research and use technological advances to strengthen airplane windshields so they don't get sandblasted, and to create advanced filters able to prevent damage to airplane engines.

We humans often think we are so great, with all our high technology. But mother nature easily puts us in our place. Our job is not to fear the disasters that nature hurls but to understand them, figure out where they came from, and eventually master them.