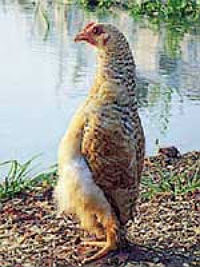 This chicken from China is nicked Mumble. Farmer Lu Xi is the owner. The bird looks cute. It waddles like a penguin.
Talking about chicken, here is a fable taken from somewhere:

On a farm, there was a flock of chickens. One chicken started talking with another, remarking "How good our farmer has been to us. I think he is an awfully nice man, because he comes every morning to feed us." The other chicken nodded in agreement, adding "and he has been feeding each and everyone of us here every day like clockwork, every day without fail since we were all just little baby chicks." Indeed, when queried, most of the other chickens clucked in agreement about how benevolent their farmer was.

But there was one chicken, intelligent but eccentric, who countered saying "How do you know he is all that good? I remember, not too long ago, that there were some older chickens who were taken away, and I haven't seen them since. What ever happened to them?"

Some of the chickens may have slept a little uneasy that night, but in the morning the farmer came as usual, this time scattering even more corn around. The chickens ate this with gusto, and this dispelled any remaining doubts about the benevolence of the farmer. "You see, there is nothing to worry about. Our farmer had a little extra food, so he gave it to us because he likes us! He is a good man," remarked one chicken to the others, and they all nodded in agreement, all of them, that is, except one.

The intelligent but eccentric chicken became even more agitated. "He is just fattening us up! We are going to be slaughtered in a weeks time!" he squawked in alarm. But nobody listened. All the other chickens just thought he was a troublemaker.

A week later, all the chickens were placed into cages, loaded onto a truck, and driven to the slaughterhouse.

Moral of the story: You cannot always induce the truth from past experience!