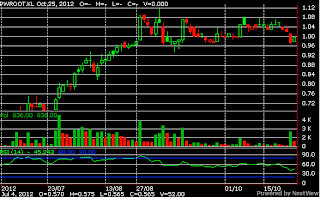 PW Root is moving in the range of between RM1.08 and 0.975. The pattern appears to be one of distribution. I understand that FGV, a major shareholder of the stock has been selling PW Root for some time. It has not sold everything. So obviously it does not want the stock to go down.

The formation of the last two candles is called a Harami.  If this formation appears at the bottom of a chart that has a long downtrend, it's a bullish sign. But it is now at the top although it is at the bottom of a range. I think the stock can only be considered to be bullish after 1.08 is beached. If the price breaks down to below 95 sen, the stock has turned bearish.


When a major shareholders sells, institutions may be buying, hence you see the large turnover. In such a scenario, whether the stock breaks up or down depends on who is the stronger and how keen other buyers are. Buyers will rush in to buy when the quarterly report is better than expected. This is true the other way round.

PW Root is about to announce its 2nd quarterly report, the latest being the end of this month. Watch out for this report. It will determine the direction of the trend. In the meantime, should you buy or sell?

It's your money, you make the decision.