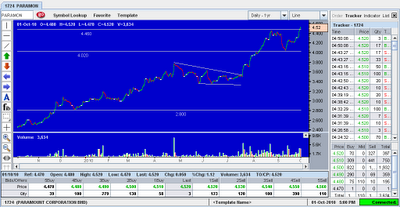 Paramount Corp (PC) has breached its overhead resistance. It is now poised to go higher. If you are not on board the ship yet, it may not be too late to jump onto the bandwagon.

As at June 30, 2010, PC has cash and bank balances of 231.64 million. From the sale of its JIB shares, it will add more than 130 million to its coffers. With so much cash in hand and little borrowings, PC is likely to give out some goodies to its shareholders. A bonus issue and a special dividend are possibilities. PC has a small paid-up capital of only RM117,482,000. Its par value per share is RM1.

EPS for the 6 months ended 30.6.10 was 36.23 sen. And according to the management, the group's prospects for the remaining 6 months are expected to be good. Using this figure to annulize, the EPS for the year would be 72.46 sen.

PC closed at 4.52 per share last Friday. At his price, the forward PE is 6.237. This is undemanding as the average PE in the property sector is much higher. If PC is rated at a PE of 8, which I think is not unreasonable, the price goes up to 5.80. Hence, there is still money to be made from PC if you buy the stock now.

The much-talked-about Economic Transformation Programme (ETP) which includes the mass rapid transit (MRT) and the high-speed train projects which if implemented successfully would result in rapid rise in the prices of land in Malaysia. This will boost the value of PC whose core businesses are in property development, construction, and education.

Stock prices are extremely difficult to predict. So, as usual, you buy or sell at your own risk absolutely.
Posted by Ben Gan at 8:20 AM